Difference between revisions of "Steel sabre"

The sabre (or saber) is a European backsword with a distinct curvature and a rather large hand guard, covering the knuckles of the hand as well as the thumb and forefinger. The length of sabres varied, but they were always made to be worn in a scabbard hanging from the waist.

The origins of the sabre are somewhat unclear, and it may come from designs such as the falchion or the scimitar (shamshir) used in the middle ages by such Central Asian cavalry as the Turks, Tatars, and Mongols. Originally, the sabre was used as a cavalry weapon that gradually came to replace the various straight bladed cutting sword types on the battlefield. As time went on, sabres became insignia of rank in many armies, and dress use of sabres continues to this day in some armed services around the world.

The sabre saw heavy military use in the early 19th century, particularly in the Napoleonic Wars, where Napoleon used heavy cavalry charges to great effect against his enemies. The sabre faded as a weapon by mid-century, as longer range rifles made cavalry charges obsolete, even suicidal. In the American Civil War, the sabre was used infrequently as a weapon, but saw notable deployment in the Battle of Brandy Station and at East Cavalry Field at the Battle of Gettysburg in 1863. Many cavalrymen - particularly on the Confederate side - abandoned the long, heavy weapons in favour of revolvers and carbines.

The above information was taken from the Wikipedia article at http://en.wikipedia.org/wiki/Sabre. 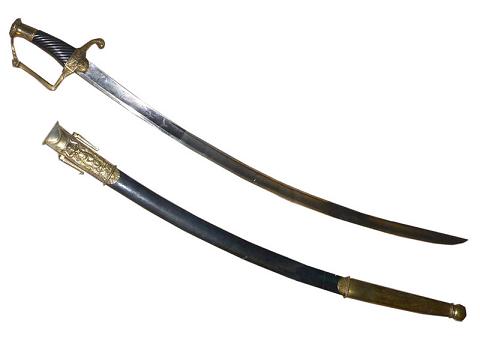